First published in Gen. Sp. Orchid. Pl.: 104 (1831)
This species is accepted
The native range of this species is Mexico to Colombia. It is a perennial or subshrub and grows primarily in the wet tropical biome. It is has environmental uses and as a medicine. 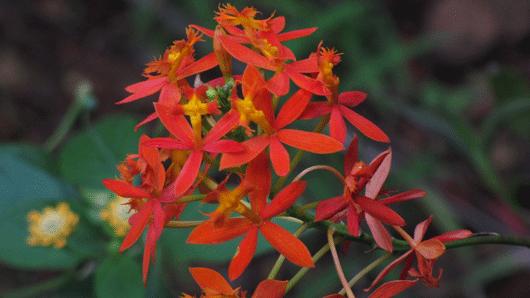 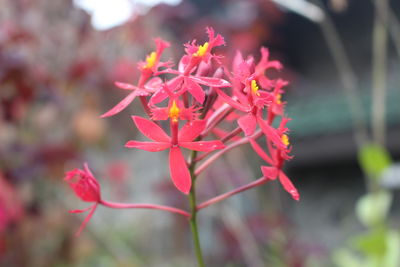 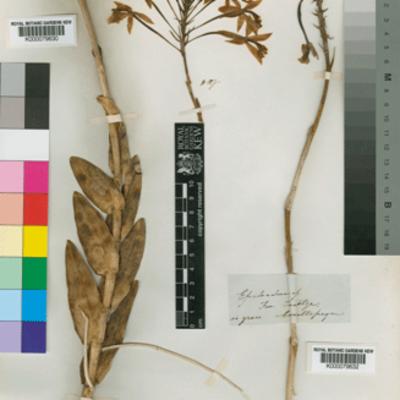 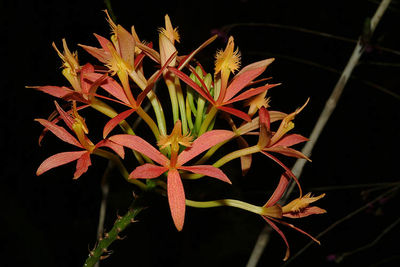 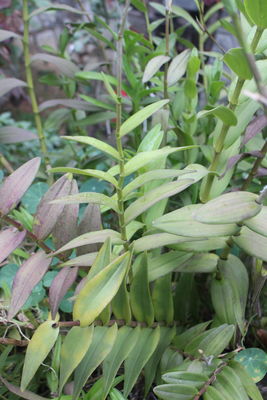 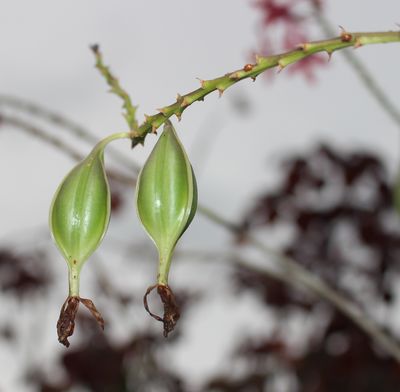 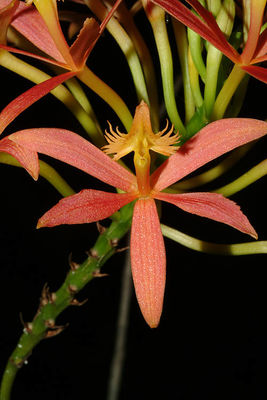 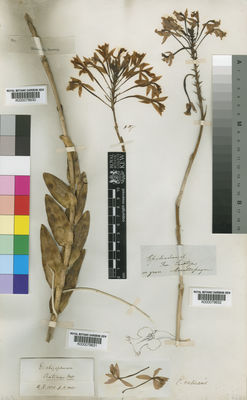 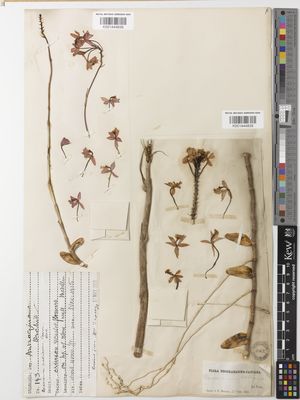 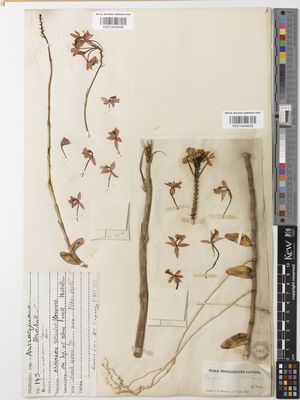 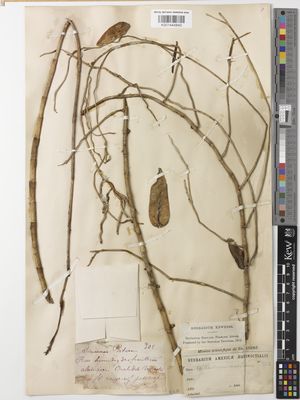 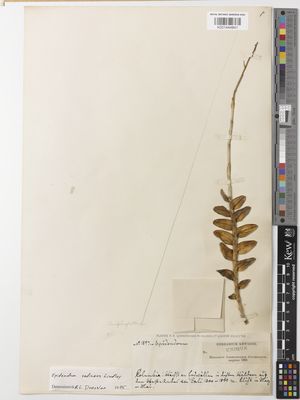 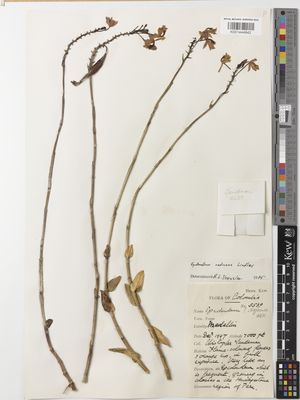 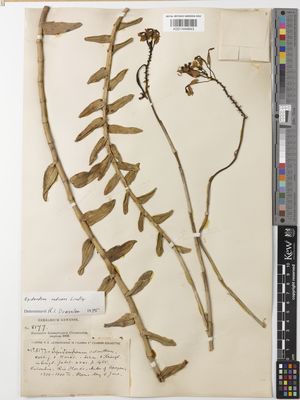 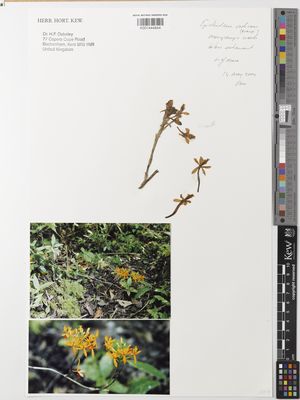 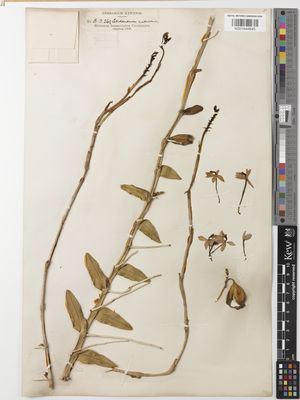 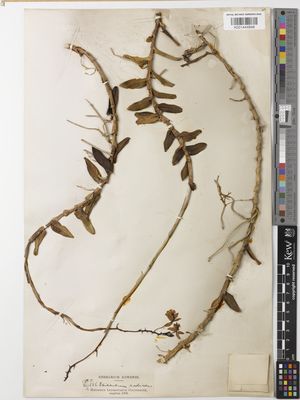 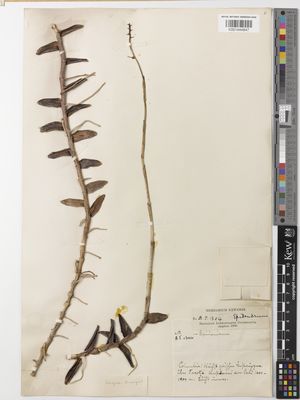 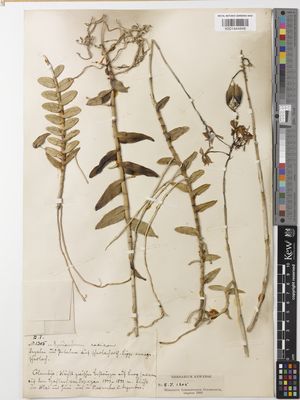 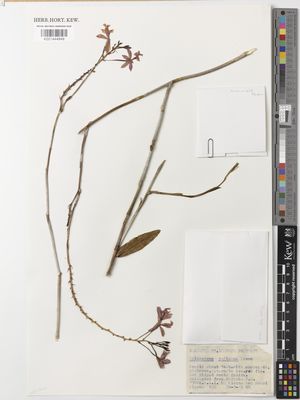 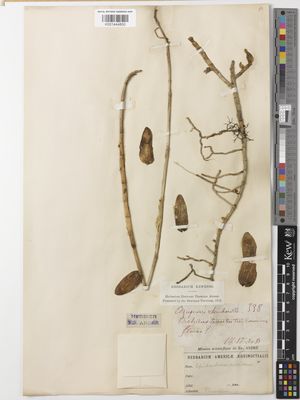 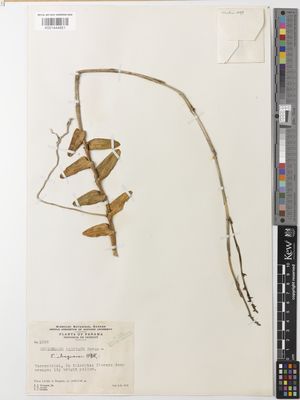 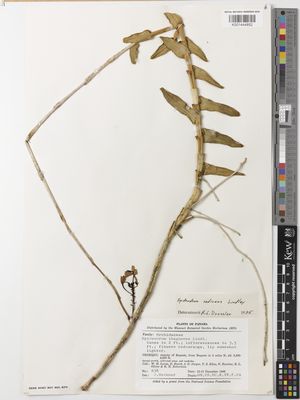 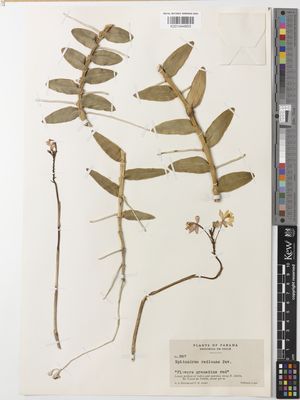 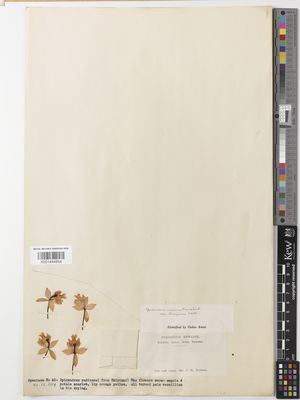 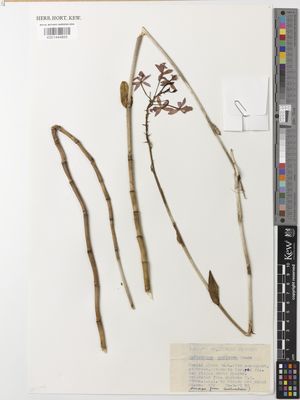 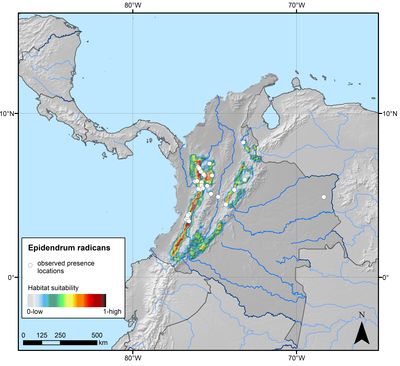 The flowers of E. radicans are superficially similar to those of two common plants (Asclepias curassavicia and Lantana camara) that often grow alongside it. This led some to believe that E. radicans, which does not produce nectar, had evolved as a mimic of the others, which do. However, research by Bierzychudek in 1981 did not support this hypothesis.

Widely cultivated as an ornamental, E. radicans has become naturalised in some parts of Africa, Asia and Australia, predominantly on disturbed sites.

Overview: Sympodial (producing each new growth from the base of the old growth) orchid with long, cane-like stems, each with a terminal inflorescence.

Stems & leaves: Stems up to 100 cm long and 1 cm in diameter. Oval, fleshy leaves set at regular intervals along the stem. Conspicuous, white, fleshy, aerial roots emerge from the leaf axils of new growth and aid entanglement with supporting vegetation.

Flowers: Clusters of 20-30 individual flowers are held at the end of a long stalk, the whole inflorescence being up to 50 cm long.

Flowers are small and bright orange with a yellow column. They have ovate sepals and petals, and the lip is three-lobed. Each lobe is fringed and usually a lighter orange than the tepals, fading to yellow at the base of the lip.

The column (fused male and female parts) and lip are fused together, forming a single structure. Flowers are pollinated by butterflies, the proboscis of which can fit into the resulting narrow tube.

Epidendrum radicans is cultivated as an ornamental (as a garden plant in tropical regions and pot-plant elsewhere) and is also grown for cut-flowers.

It is only rarely used for producing hybrids due to its vigorous nature and because its stems tend not to be self-supporting.

The Millennium Seed Bank Partnership aims to save plant life worldwide, focusing on plants under threat and those of most use in the future. Seeds are dried, packaged and stored at a sub-zero temperature in our seed bank vault.

A collection of Epidendrum radicans seeds is held in Kew's Millennium Seed Bank based at Wakehurst in West Sussex.

Epidendrum radicans should be kept at a temperature of 21-28°C, with a winter minimum of 12°C. It can be grown in an open medium (such as bark chips or charcoal) or as an epiphyte, for example by attaching a cutting to cork bark.

Due to its vigorous nature it is impractical to grow E. radicans among other plants unless support is provided and stems are regularly tied-in. The growing medium should be kept moist, without allowing the plant to sit in water (which can rot stems and roots). Weak fertiliser should be applied (usually a quarter of the stated dose for general plant fertilisers).

Epidendrum radicans is grown in the behind-the-scenes Tropical Nursery at Kew.

Dried and alcohol-preserved specimens of Epidendrum radicans are held in Kew's Herbarium, where they are available to visitors from around the world, by appointment. The details of some of these specimens can be seen online in Kew's Herbarium Catalogue.